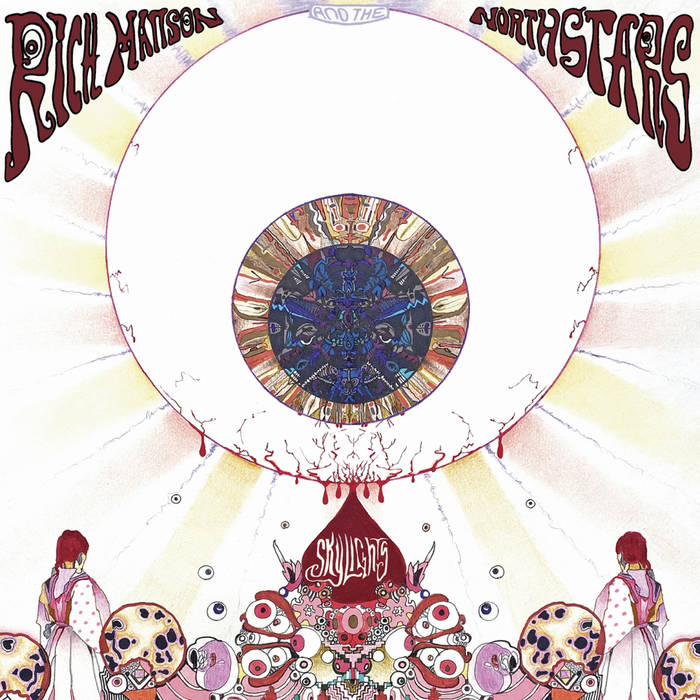 Skylights is the 5th full-length release from Minnesota’s Rich Mattson and the Northstars. There is a chance you’ve crossed musical paths with Mattson before from his past bands Ol’ Yeller, the Glenrustles, the Tisdales, and current side projects the Bitter Spills (folk duo with Baby Grant Johnson) and Tired Eyes (Neil Young tribute with Al Sparhawk of LOW). The Northstars began in 2014 with Rich and his love and life partner Germaine Gemberling. They met back in the 90’s in Minneapolis when the city was an indie rock hot bed and she was in the all girl punk band SMUT. Over the past 10 years Rich and Germaine have been writing songs, recording, and performing together all around the state of Minnesota and beyond. Joined by the dream team of drummer Keely Lane (Ol' Yeller, Trailer Trash, Beatifics) and Duluth bassist supreme Kyle Westrick, the band’s live set sounds just like the “Skylights” album on steroids.

Rich Mattson recorded the album at his Sparta Sound studio. Along with 9 new originals, Skylights also features two songs by Germaine; "Kiss the Sky" (featuring Ryan Young of Trampled by Turtles on violin) and "How Can It Be?" Special guest and fellow Iron Range native Keith Secola plays Native Flute and sings on his song, "King By Now," the album's closer.

The Northstars started off acoustically, as a “Cosmic Folk” outfit but over the years the sound has cycled back to what they do best, which is rock and roll. Rich Mattson and the Northstars grew up on classic rock, new wave, punk, outlaw country, and 70’s am radio. Friend and musical guru Dave Russ said Skylights "Sounds like the Byrds meets the Replacements."

For most of the past 30 plus years Rich Mattson has been to those in the know in Minnesota rock music circles, one of the most talented, hardworking, performer/songwriters in the business. While being largely and criminally unheralded for a large portion of those years sans that time his band Ol’ Yeller received the 2006 Minnesota Music Award for best recording. Rich encompasses the heart and soul of what makes Minnesota rock and roll special and sets it apart. He has paid his dues and then some crawling through the grimy underbelly and the scattered remnants of what was left of the Minneapolis rock scene in the wake of influential and noteworthy bands like Husker DU, The Replacements, Soul Asylum, Babes in Toyland & The Jayhawks to mention just a handful.

When everyone seemed to stop paying attention to what was happening musically in Minneapolis, Rich persisted with constant local gigging, recording and touring. Year after year, album after album, show after show delivering his dirt under the fingernails guitar riffs and stories of Midwestern plight and rock and roll dreams. His modest and relatable everyman approach with a tireless work ethic and undeniable passion and love for the music he makes has garnered him a loyal dedicated following who he never lets down. Listen to a Mattson song and you’ll know what a crisp Minnesota Autumn day feels like with a six pack in ya.

Poor L’amour Records is proud to release the next chapter in the ongoing Rich Mattson story. Rich is now with his Northstars who have his back through his every salt of the earth, blue collar, meat and potatoes, rock and roll twist and turn. Skylights is an energized collection of classic rugged Mattson songs like “Death Valley” “In Flight” & “Iowa” complimented and rounded out by Germaine Gemberling’ s wonderful vocal performances when she steps to the forefront for “Kiss the Sky” & “How Can it Be”. These two complement each other like a modern day June and Johnny. While Germaine and Rich do the steering the impressive tandem of Keely Lane on drums and Kyle Westrick on bass keep their foot on and off the gas at all the right moments. Sit back crack a cold one and enjoy Skylights.

With Ryan Young-violin on "Kiss the Sky" and Keith Secola-native flute and backing vocals, songwriter "King By Now."

All songs by Rich Mattson, Esper Music (ASCAP) except "Kiss the Sky" and "How Can It Be?" by Germaine Gemberling, L'Etoile Du Nord (BMI) and "King By Now" by Keith Secola, Akina Music (ASCAP).