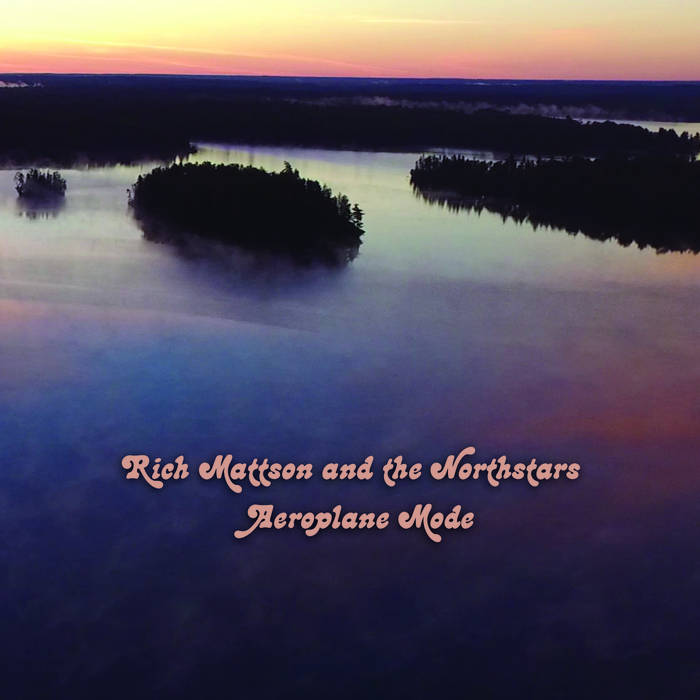 This new collection of songs from Rich Mattson and the Northstars was recorded at Rich’s Sparta Sound studio located in northern Minnesota. If you’ve not heard of Rich Mattson, you’ve certainly heard some of the artists he has worked with; Trampled By Turtles, Charlie Parr, Alan Sparhawk (Low), Scarlett Rivera (Bob Dylan) to name just a few.. You also may have heard some of his or Germaine’s bands over the past 30 years; Ol’ Yeller, the Tisdales, the Glenrustles, SMUT, etc..

“Aeroplane Mode” is Mattson’s 30th(!) album. Let’s break that down:
Rich Mattson and the Northstars (4), Ol’ Yeller (7), the Tisdales (3), the Glenrustles (5), the Bitter Spills (4), Germaine Gemberling (2), Junkboat (1), and solo (4). With the exception of the Northstars and bandmate Germaine Gemberling, these are his former bands, who may or may not reconvene and revisit the old songs from time to time.. For the most part Rich is happiest when moving forward and creating. The aforementioned figure does not include the hundreds upon hundreds of bands and performing artists who have passed through his Sparta Sound (2005-present) and Flowerpot (1991-2005) studios over the years, nor does it include his collaborative work with Dave Rave, (the Shakers, Teenage Head) bootleg covers compilations or the two rough album-length demos of his high school band from the 80’s. For the record, Rich Mattson is only 50 years old.

Aside from putting out a quality album (or two) every year and playing with the Northstars, Rich Mattson can be found performing in strange corner bars, playing covers from “Cruel To Be Kind” to “Luckenbach Texas” all alone, with a conga player, or with the his songwriting and life partner, Germaine. He also leads a Neil Young tribute band with Alan Sparhawk (Low) and brother Glen Mattson (drummer of the Glenrustles). Last summer his high school band played a 50th birthday party where they did 55 songs in 4 hours without taking a break. “New wave” songs. If that’s not enough, there’s an annual Johnny Cash Tribute (at the Cabooze) where he’s stolen the show for 20 years running. The man is a human jukebox.

Regardless, with all this happening, Mattson makes no secret of his passion for the Northstars. “This is the band that is creating, recording, rehearsing, and doing the big shows. This is the band that’s moving forward.” He says. And with the solid rhythm section of Kyle Westrick and brand new addition of drummer Keely Lane (Ol’ Yeller) to the mix, they are ready for anything.. The past 3 years kept the band performing in their beloved Minnesota, but as for what’s to come, Rich Mattson and the Northstars are about to take flight. Aeroplane Mode.