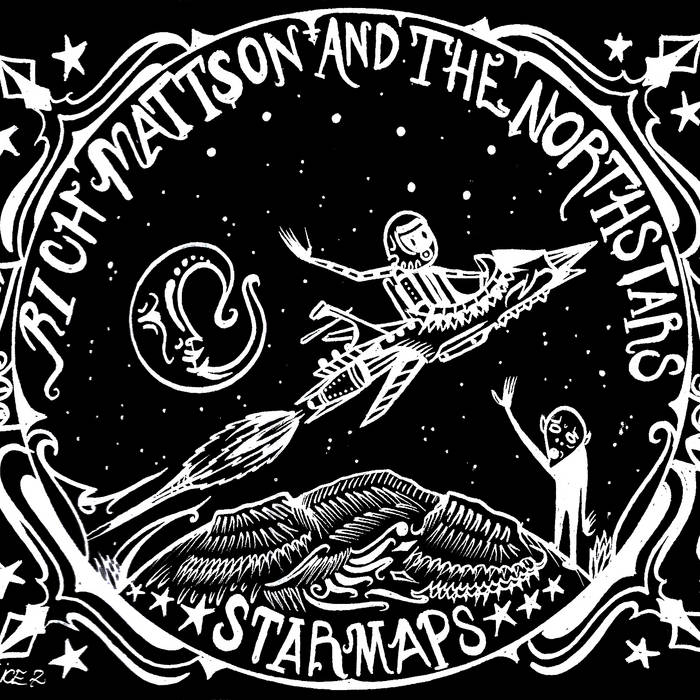 As I think back on the making of “Starmaps” I figured I could share some of the story behind it. The title came to me as I was thinking of a name that would go with “Northstars”..something celestial with a feeling of motion. Maps to the stars, drifting through the stars..thinking about how to navigate through this life, this planet, floating through time and space, how infintesimally small we really are in the grand scheme of things. Plus the songs, the band, our lives, a journey worth taking..is anyone really sure where they are going? Sometimes I wonder, does anybody really know anything for sure? In this day and age, it’s hard to tell. It seems like there are hundreds of answers to any given question.

STARMAPS had a release date of October 18, 2016. The date is very significant to me as it marks the day I became older than my father, Richard Mattson Sr. My dad passed away October 18, 1990 at the age of 49. His birthday was a day after mine, April 24. This also explains why on my birthday this year I put together a show with four bands that I perform with. I just wanted to honor my old man by exhibiting my vitality and love of life, friends, and music. It was a great night.

I’ve never done this with an album before, and this one is short (only 8 songs..I’ll get to that later), but I thought I’d offer a brief synopsis of the songs:

TRIP TO A FLAME: I wrote this song just after the Paris attacks at the Bataclan. Thoughts about how random these things sometimes are, and how while there are random acts of violence there are also random acts of kindness that should not be taken for granted, and should in fact be practiced. Kindness begets kindness. Germaine and I have a friend who had an evening seminar on “soul journeying” that we attended, and as I laid on a blanket on the floor with my eyes closed to the sound of her drum, my “journey” ended with me looking at a flame suspended in the sky. I did a little research on this symbolism and it all coalesced in this song.

ONE AND ONLY: Germaine had been kicking around this melody for months and we needed to come up with some words to make it into a song! One night, camping in the U.P. I hatched this crazy story about an “accidental” bank robbery. The way the story goes, a bank robber is shot as he’s running away from the bank. The bag of money goes flying, and falls just in front of an innocent young lady who was only going in to deposit her measly paycheck plus some “pennies from the jar.” A deputy was also shot, just the distraction needed for her to grab the cash and jump back into the car with her boyfriend, who was waiting..of course the story doesn’t end well.

WINTER BLUE: As I started strumming this chord progression over and over, the words came out as an ode to winter. We know a lot of people might think it’s a little audacious to write a song about wanting to go back into winter and all but there are many things to look forward to in those cold months. Here in northern Minnesota it’s friends and family, taking care of each other and finding things to do outdoors that gets us by.

THROUGH THE CRACKS: This quick little jamout deals with the topic of rocking into one’s 40’s and beyond.. When we recorded it, I joked to Curtis (on the drums), “When we get too old to play this, it’s time to hang it up.” We then played it as fast as we could.
Going forward
Not looking back
Or falling apart and slipping through the cracks..

MISGUIDED ENERGY: This song is for the most part about how everyone knows right from wrong, but oftentimes people are drawn to just do the wrong thing. Remember your heroes, gurus, and mentors for they guide you towards your good conscience.

STAR DUST: Germaine wrote these lyrics after the loss of a pet. It was a dog I had for 16 years and she was my best friend through some rough times in my life. The words hung on my bulletin board for about a year before I finally put them together with music. Something to ruminate on: “The electricity that powers thoughts to our brain, is stronger than lightning..”

SCARCITY: A song sparked from a disagreement. Conflict and resolution. Hurt feelings. War. I remember hearing somewhere that the only thing ancient civilizations fought over was scarcity. And really that’s all that is worth fighting for, as it means survival. I also like to break it down into two words; scar city..like a city of wounded souls. Maybe that’s getting too deep..

PLEASE BE KIND: We recorded this song on Germaine’s first solo album in 2011 but it’s always been one of my favorites and I’ve always felt the Northstars do a great version of it. And what a positive message to end the album with. I love to see people sing along to this one.

So that’s all 8, usually I’ll put 12 or 14 songs on an album (never 13! ..or maybe that did happen somewhere along the way) but as we were recording this, our bassist, Dr. Russell, moved away, our violinist Eli got busy with life and had to leave the group, and drummer Curtis graduated from college! People were busy! Let’s just say it’s like a transitional album..when the dust settled we adopted a new bassist in Kyle, who’s a fantastic musician and always good to go and up for anything. We’re keeping Ryan busy while Trampled By Turtles is on hiatus. These 8 songs fit together nicely and as I’ve been saying, they can serve as a sweet soundtrack as we go into winter 2016-17. And now for some up-north woodshedding.